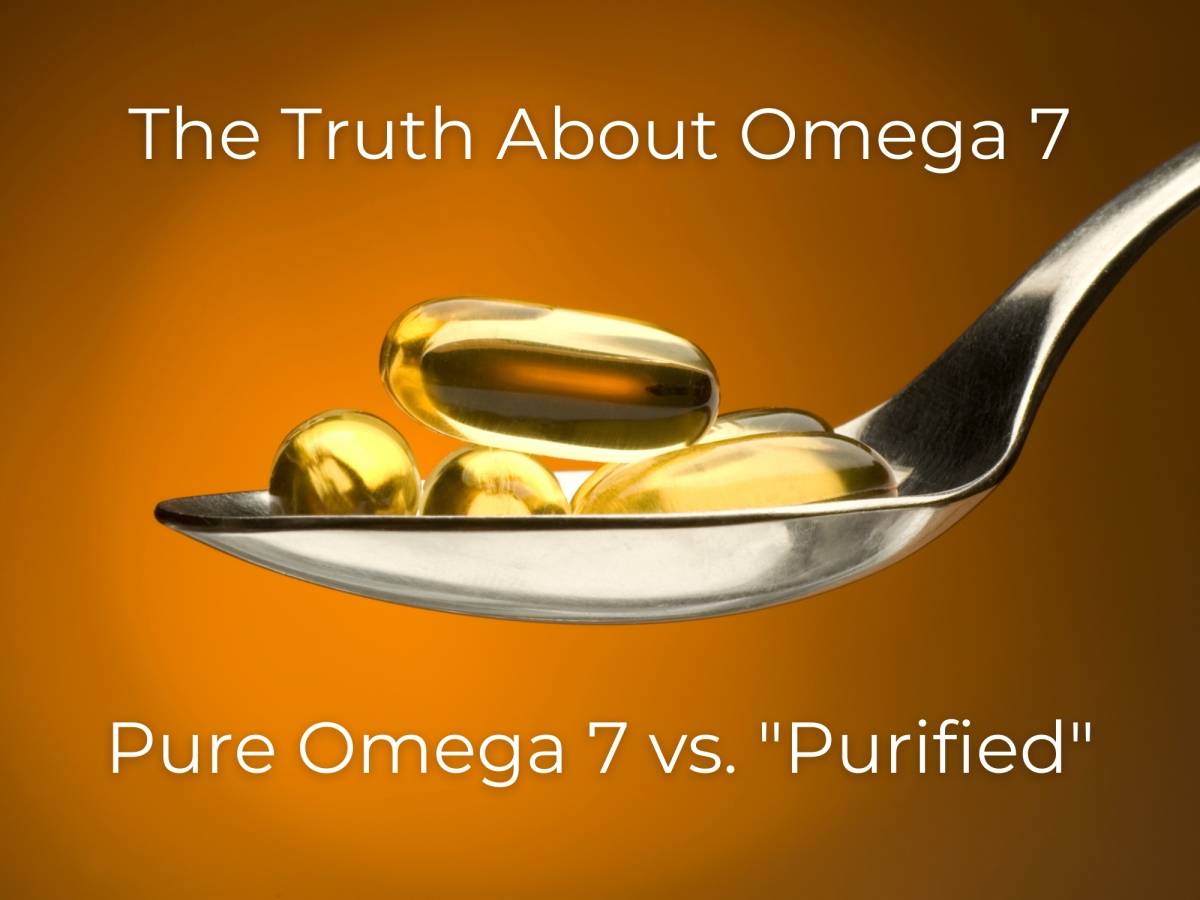 You’ve probably heard how beneficial omega 7 is for your whole body—your skin, losing weight, and keeping your energy levels stabilized. If you’ve spent any time researching omega 7, you’ve most likely found information saying that purified omega 7 supplements are the best.

While the research may look convincing, it’s simply not true. Don’t let this misinformation deprive your body of the natural, safe and wholesome source of omega 7 that can be found in sea buckthorn.

If you’ve ever had to ask, “What is Omega 7?” then this post is vital for you and your health.

Omega 7 is a class of unsaturated fats that has amazing healing properties. Omega 7 oils can help prevent you from gaining weight, as well as clear up acne, regulate metabolism, and make blood pressure stable.

An excellent source of Omega 7 is sea buckthorn, which is a non-cruelty and vegan way to get this helpful oil in your diet.

However, there are many misconceptions about this oil, and the FAQ section below will help you understand the benefits of Omega 7 from sea buckthorn as well as clarify some myths about what Omega 7 really is.

While some people might try to tell you it doesn’t matter where you get your Omega 7 oil from, that’s not exactly true.

If you’ve ever wondered “What is Omega 7 made from?,” here is your answer...

Omega 7 that is purified from fish oil is refined through a lengthy process that ends up stripping the nutrient of some of its most valuable qualities. It also has toxins from the sea water that are highly concentrated. If you want all the health benefits of Omega 7 oil without the yucky stuff, look to the Omega 7 supplements extracted from sea buckthorn.

Another positive aspect of Omega 7 taken from sea buckthorn is that it is completely vegan and cruelty-free. Since the Omega 7 is concentrated from a plant source rather than an animal source, it can be used by just about anyone.

Still unsure about which Omega 7 is better? Think about the amount of processing that goes into Omega 7 capsules.

When you compare the simple process of obtaining Omega 7 from sea buckthorn to the multi-step, chemical-heavy process of extraction from fish oil, it’s a simple choice to make.

While we’re on the topic of what is Omega 7, we should clear up some misconceptions.

You may have heard that palmitic acid is bad for you and that Omega 7 supplements from sea buckthorn are not safe because of the presence of palmitic acid.

But that couldn’t be further from the truth. In short, there is nothing to worry about when it comes to palmitic acid. In fact, palmitic acid is in more things than you probably realize.

To help you understand just how unfounded this claim is, there is more palmitic acid present in dark chocolate and olive oil than there is in sea buckthorn.

These are foods that are good for us in reasonable amounts and that most people would not hesitate to consume because they are considered healthy.

Like most things in life, too much of something can be a bad thing, and that’s certainly the case with palmitic acid.

Although too much palmitic acid in your diet is not healthy, the amount of palmitic acid in a 1000 mg dose of SIBU Omega-7 Support Soft Gels is under the 1% daily limit recommended by the WHO.

To break it down for you, literally, palmitic acid is acquired through sources like oily fish, certain nuts, or sea buckthorn berry and then desaturated to become palmitoleic acid.

In 2008, researchers at Harvard University discovered that the palmitoleic acid in Omega 7 acts like a hormone in your body, rather than a protein, and is what the weight loss factor is attributed to; it's this part of the amino acid that fights against obesity and its related diseases and conditions.

Despite the questioning of these two acids on whether these are actually good or bad for you, they are actually where most of the benefits of the Omega 7 fatty acid comes from.

And be sure to keep in mind that for optimal benefits of this omega-7 fatty acid, you want it to be as all-natural as possible. As opposed to fish oil supplements or those made from nuts which use chemicals to separate the palmitoleic acid, SIBU’s sea buckthorn berry supplements are 100% natural, using only hard work, water, and presses to make their Omega-7 supplement.

In addition to the Omega 7 that comes from sea buckthorn, there are other sources of Omega 7 that might already be a part of your diet.

Omega 7 oils like macadamia oil, dandelion oil, avocado oil, and pomegranate oil can be a healthy and tasty addition to your diet.

Oily fish like tuna, salmon, sardines, anchovies, and herring are another way to add Omega 7 to your diet.

But keep in mind, the amount of omega 7 you get into your system from food is minimal compared to what you would get from the SIBU Omega-7 Support Soft Gels.

If you’re already doing research on Omega 7 nutrients, we probably don’t need to tell you all the wonderful things they can do for your body—but we will anyway.

Omega 7 is a healthy oil that lubricates your body’s systems and makes your body function better.

It will make your skin look younger and have fewer wrinkles, strengthen your heart and consequently your circulatory system, prevent acne breakouts, and help your blood sugar stay at a healthy level. It will also do wonders for your hair and nails.

The Omega 7, found so purely in sea buckthorn, is truly a nutrient you don’t want to go without.

As your body ages, it needs all the help it can get to keep in peak physical form. When your body gets older it requires a strong foundation to stand the test of age. Omega 7 supplements can help your body keep its youthful look and feel.

You can take control of your health and experience the benefits of Omega 7 in a plant-based, vegan form, raw, unaltered nutrition from SIBU Omega-7 Support Soft Gels. You’re going to look and feel amazing.

Below you’ll see that we’ve put together a series of slides to help debunk the myth that man-made, “purified” Omega 7 supplements are superior to raw, unaltered whole food nutrition.

We’ll dive into more detail about the purification process required for each and why sea buckthorn is a key source of Omega 7 that your body will thrive on.

Q: How much palmitic acid is in Omega-7 Support Gels?

A: The total amount of palmitic acid in a dose of Omega-7 Support Soft Gels is slightly less than 1% of the daily maximum limit the WHO (World Health Organization) recommends. One dose of the SIBU soft-gels contains about 40% Omega 7 (mostly palmitoleic acid and a little cis-vaccenic acid). Palmitic acid is bad in large quantities (as in most American diets) but 1 dose of 1000mg of SIBU soft-gels contains less than 1% of the recommended daily maximum so it’s negligible.

A: The daily recommended dose for the Omega 7 Support is 2 500mg soft gels/day.Be sure to check with your doctor about Omega 7’s possible effects on your body before you begin.

A: We recommend starting with 1 oz. per day. You can slowly increase from there up to 4 oz a day.

A: While Omega 7 doesn’t necessarily make you lose weight, it does signal the body to stop storing excess fats to help keep weight off. Omega 7 has been shown in studies to help the metabolic system function properly. It triggers the body to burn fat rather than store it.

Omega 7 Support is NOT a weight loss product; however, sea buckthorn oil and Omega 7 do have benefits that aid in fat use in the body. To learn more about other amazing properties of Sea Buckthorn, visit the SIBU website today!